I’m here! We’re all emigrated and stuff, the house is sold, we have ID and bank accounts and healthcare and a new sewing machine…. No house yet but I am working full time at My Sewing Room in Calgary so I get to be around and be inspired by lovely fabrics every Tuesday to Saturday.

It’s tiring working on your feet all day. I’ve forgotten what it is like, having worked a lazy desk job for the last eight years. I’ve also not got my fabric yet, the boat docked but the stuff is still needing to travel across the country from Montreal. It has made me a bit reluctant to sew or write my long awaited patterns, but I think I’m coming through the other side of that now. Another distraction has been the lovely countryside and western style little towns in the area, and we have been walking around and snowshoeing and stuff, interspersed with naps and watching hockey in the evenings. 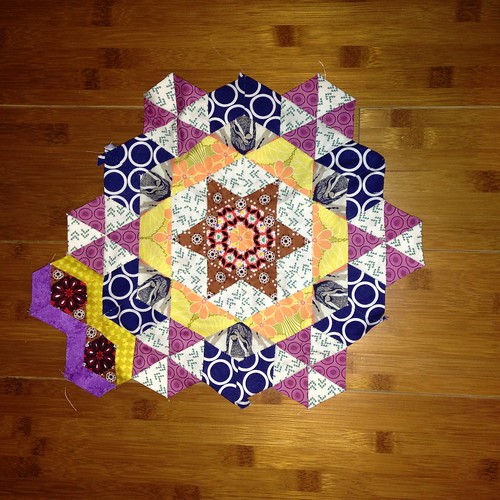 Progress on my Hexie medallion thingy, not sewn any since we arrived here on 5th Jnauary but did a fair bit in the Christmas break.

Some stashing has occurred (though I stupidly bought the same black and white Blueberry Park print twice- two FQs :S

Top left is a knit remnant I should be able to squeeze a raglan out of once I have contrast for the sleeves and waistband.

One massive thing I bought is my new sewing machine, which is a Brother Innovis NQ700. I have a workshop on Sunday to get acquainted with it better.

I’ve nearly finished my two Spelling Bee blocks for Elizabeth– they will be the words “loves” and “the”, though I’ve had no cutting mat or ruler, another reason my sewing has been minimal. 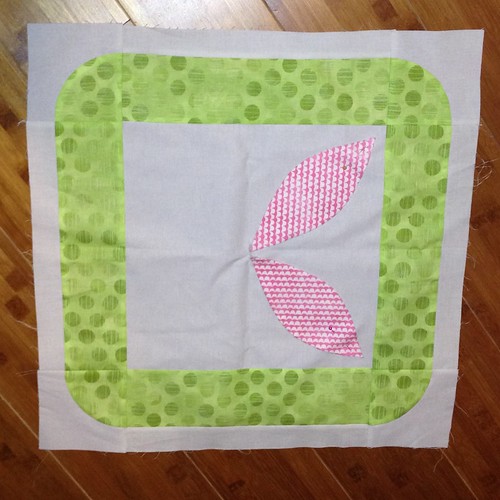 I’ve started on the next Quilt Workout, though I will be finishing the Shine Bright pattern as a matter of priority.

I’ve just this evening submitted a book proposal, so I hope to have my sewing juices running again soon. I’m also in a couple more magazines in the UK at the minute but I’ll blog about that when the other one has arrived here…

I’ve not read any blog posts whilst I’ve been here, nor have I responded to older comments. I’ve also been rubbish at promoting and cheerleading for Patterns to Print. I’m going to start afresh as of now, I’m not ignoring you, honest, just not enough hours in the day!