I’ve not thought of a new name for this yet, despite intending to! Suggestions are welcomed.

Light was a bit flat today so you can’t see the quilting that great, sadly I have morning gloomy light or nothing and it only gets worse now the days are getting shorter

The piecing was finished 15 months ago. This is a bit of an embarrassment for me as I like to get stuff done quick, but I stalled at how to quilt it, and even when I doodled and got a plan in place, I had lots of other stuff to finish first. Actually looking back to blog posts at that time, my log cabin quilt is about as old. Oops.

I think one of the issues is that it is not my own design. It is from American Patchwork and Quilting Magazine (Feb 14 issue I think)- it is the cover quilt in the same issue as the APQ Tone-it-Down quilt along. 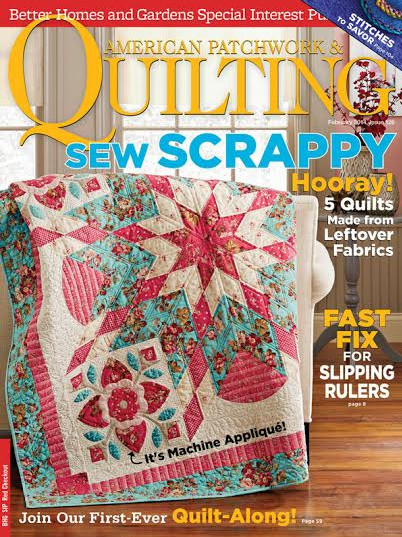 It only took a few weeks to make the appliqué blocks from scraps and only a few months more to do the rest of the piecing and baste it. I even did the boring stitch in the ditch bits about a year ago!

But now it’s finished in a combination of feathers, some orange peel which I always enjoy, and some corset-lacing-esque quilting that was supposed to be like Denyse Schmidt’s figure of eights but nowhere near…

Matchstick quilting for textural contrast between straight line quilting marked on the top (with my enemy the Frixion pen) that would have been so much better had I discovered using rulers on domestic machines before I started (and fixed the problems detailed in my last post, which I am still working on)…

Yes the points are a bit iffy (I have improved over the last year or so) but I’m pretty proud of the quilting, despite it being nowhere near show quality. I still want a long arm though as I think I could get there eventually without the jerkiness of shoving the quilt through the machine! I’m not sure whether I enjoy piecing or quilting more, though I know a lot of people would prefer to just make the tops. I go through phases and I’m definitely in the enjoying quilting stage right now.

I then washed the quilt to get a bit more visible texture, especially after ironing out the Frixion pen marks (yes I know, I used it and I don’t endorse them normally, I don’t know what came over me). I’m thinking in future I may buck the trend and move to a good quality polyester wadding – such as Dream Puff – instead of the cotton blend to get even more texture in a controlled way that isn’t helped along by the first wash.

Honestly I think it looks great, even if it’s not easy to see on these photos.

STATS
Size – 62″ square
Number of blocks – Eight diamonds, four appliqué blocks and four setting triangles (not including borders)
Time to make– I think about 6-7 hours for the piecing, and about 12-14 hours for the quilting and everything else.
Fabric – All miscellaneous stash fabrics
Backing Fabric – Miscellaneous stash again!
Binding Fabric – Two prints from stash alternated to give an almost-scrappy effect
Threads – Coats Moon in off-white throughout, except for a couple of central star echoes which were done in a deep pink Mettler. I discovered through quilting this quilt that my machine likes piecing from a cone but not quilting. This discovery has been brilliant!
Batting – 80/20 Soft and Elegant- I think, it was a long time ago.
Quilting- Lots! Details above!

Do I sell it or keep it? I’m undecided. We are being very ruthless with our packing list but the time that went into quilting makes me feel like I need to hang onto it and look at it just a little longer.

Finally, a finish for this quarter from my Finish along list and I’ve made progress on almost all of them this time… onwards to the next one!