I am a moron. You knew the next set of blocks needed to be a similar size as the centre didn’t you? That’s 12″. So why on Earth did I make them 18″? 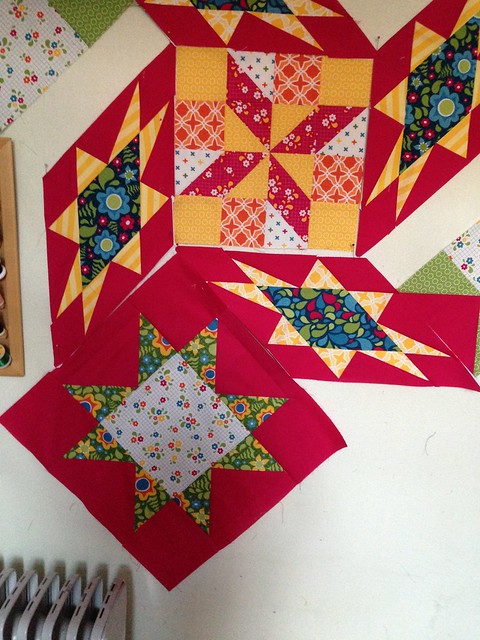 EQ7 told me they were 18″- but what it meant was tall and wide in the layout- as in, they’re on point, dumbass. I didn’t realise this until 10 minutes AFTER I emailed technical support asking why the maths was wrong.

Sigh. I guess it would have been worse if I made them too small, at least I could recut the fabric from what I’d sewn already.

This is what it looks like now- CORRECT!- after a whole bunch of wasted time. It took two to three hours ripping seams and cutting pieces down to what they should be, without actually sewing them back together. I had trouble with accurate cutting as the pieces were no longer crisp and lovely. Onwards and upwards… 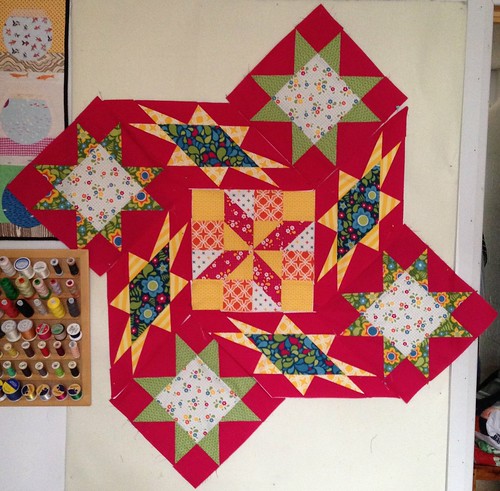 There’s another diamond shaped round to do now which I am going to piece as normal, and then I’ll be getting onto those Y seams to finish round IV and it will be one whole piece next time you see it. It gets easier from that point, but the borders are pretty full on compared to my usual style!

Moronic sewing confession 2 – I made a pair of City Gym shorts last weekend and cut off part of the elasticated waistband thinking it was excess as it was longer than the top of my shorts. This resulted in shorts 2″ too small to get over my thighs. Oh and I’d messed up the directional print as well prior to this so I had to piece the crotch. Yes that’s right, there is an extra, asymmetrical seam exactly where you don’t want one of those to be. I will unpick the waistband and make another soon using Lladybird’s technique. I’m still a bit nervous to do it in case it’s a bigger problem than just the waistband and I desperately don’t want to write off this whole metre(ish) of fabric.