This bag has been a long time in the making, though I’ve not actually told you anything about it.

It started life as an idea to replicate a bag for OH’s aunt. She had one bought at some World festival or another which had braided leatherish handles and the handles made it wrinkle a bit like a drawstring bag, but have two independent handles. It was made from a tapestry type material with some thick embroidery stitching on it too. It was well loved and she wanted a new one as the handles were unthreading themselves.

After trying a few different things, the handles were the hardest thing to get. I tried looking for thick round cord of all sorts, but generally it was thin stuff for jewellery making and that was it. In my desperation I started to look for rope.

The purchased rope was then held up by APC when they came to deliver it as even though my husband had photo ID, lives at the same address and has the same surname as me, the addressee, the guy on the collection desk wouldn’t release it (on feeling the packet I’m sure he thought we were up to something dodgy). This meant complaining and getting a Saturday delivery the weekend before this one just gone, which lost me a few more days of production time. By this point I hadn’t made up a pattern because I wanted the rope to base it on and all I’d done was source an appropriate remnant from a local fabric outlet and do a spot of embroidery on it.

During the week last week we tried all sorts to get four handles out of the 4m piece I had bought. It was synthetic so OH tried cutting it and melting the ends together, PVC pipe welding solventy stuff and Poly Cement to no avail. I needed a good strong join to make a continuous loop that could support a decent amount of weight. I kept saying that the glue gun was the best bet. In the end OH relented and plan D went into action.

What can I say other than it worked 😉 Coupled with a wrap of a fabric scrap the thing was so strong even Hank hanging off it didn’t pull it apart!

After a bit more glue-gunning, daydreaming, measuring, tweaking and such I had myself a pattern! Here is the bag to be gifted… 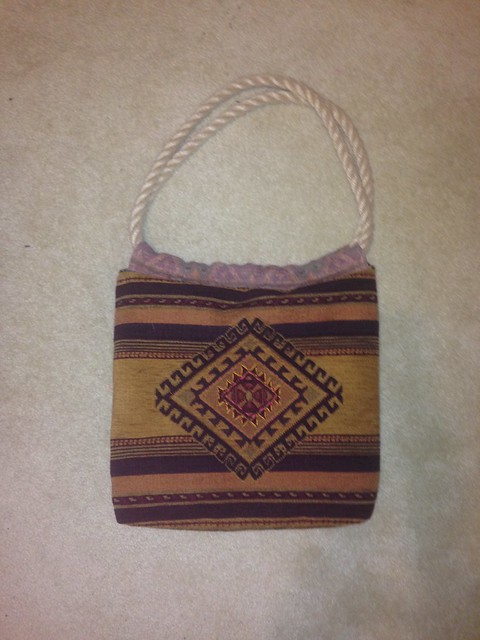 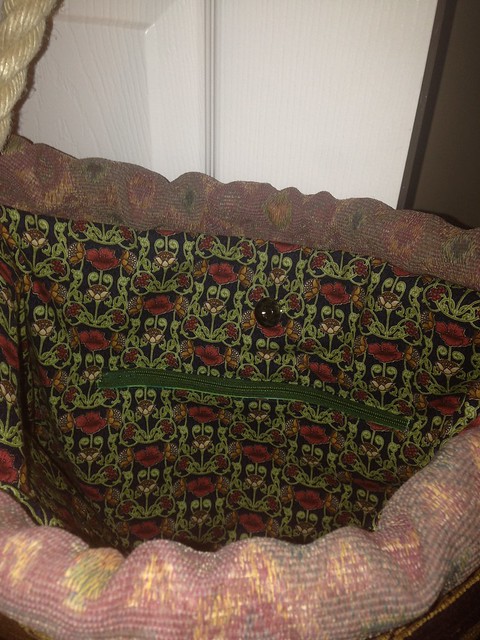 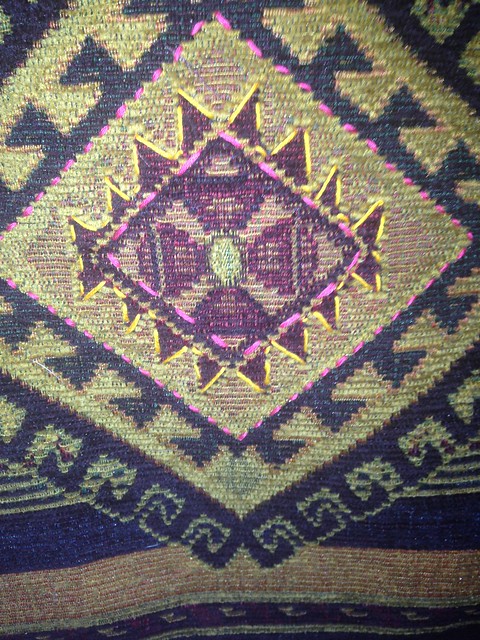 I added a zipped welt pocket inside and also boxed the corners, plus it has a magnetic clasp fastener, but essentially it’s a tote bag with a channel. It was so quick to make that I just had to make a patchwork one out of my Gardenvale charm pack that Hannah gave me for Christmas. Out of 42 squares, it uses up 40 of them, a perfect project for a single charm pack and its pretty roomy too.

I’m in the process of writing up a pattern, honestly the whole thing including cutting takes literally half an hour to sew up- result!