I’m back from my quick break to Toronto. I’ve only just sorted out some photos, and I’m not going to totally bore you with them all so I’ll give you the highlights. Still this is quite a long post by my standards with a couple of important pieces of news (in my life anyway) so you might want to stick the kettle on if you can bear it 😉

It took us over an hour to get to the hotel from the airport on public transport and then getting lost, so we agreed that a taxi back was the best way. Greeting me at the hotel was this bundle from Mad About Patchwork… (obligatory fabric image)

We made a lot of visits to Tim Horton’s for Timbits, a double double and a french vanilla each. We went shopping at the Eaton centre and we both bought shares in Roots pretty much. Alex’s new coat is lovely and big and warm!

They had this awesome embroidered cushion but I couldn’t justify spending $245 on it, so I bought a tea towel to make a replica 😉

We moved on and went into the Hockey Hall of Fame…. where they have a Nottingham Panthers jersey on display in their “International Year in Review” cabinet. Yeah

I didn’t sleep well that night- I woke up stupidly early despite being up for 22 hours. Weirdly enough, even though “East is a beast” I have had no jet lag trouble at all coming back again. The next day we went up the CN Tower and stood on the glass floor which was very freaky but good fun! There was a coach trip from Alabama there and we couldn’t get them to join us on it. 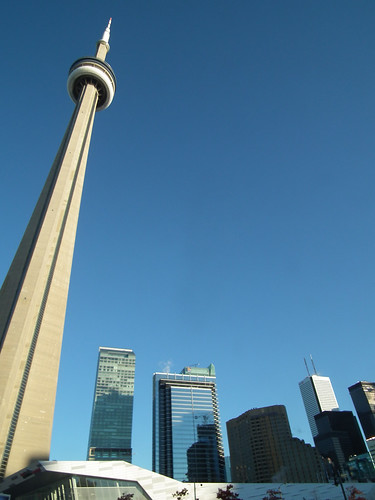 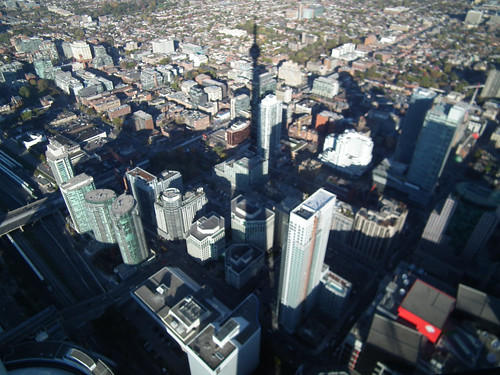 We didn’t get to the islands unfortunately because of the rain so it would be nice to go again in the summer when the bike hire is running. We did go to St Lawrence’s Market though (and bought 3 litres of maple syrup to come back with since it costs so much over here) and also the new Ripley’s aquarium (where I was told off for picking up a horseshoe crab).

Meals were a mixture of Wendy’s (quote, “best burger ever”), Red Lobster, steak at The Rex jazz club and lashings and lashings of poutine. Shame we don’t get cheese curds over here but we’re going to try and recreate the magic at home.

At the Royal Ontario Museum we were impressed by the dinosaur exhibit, and the first nations and birds areas were pretty cool too

We went to see the Marlies as the Maple Leafs vs Penguins was all sold out (as a Penguins fan I think I am pleased about that as they lost, but I would have be cheering the wrong team too!). They played really rubbish, but we were sat right next to the home bench so we got on TV and a few purchases were made. I had the most pleasant alcohol age IDing session ever. Everyone was so polite and kind to each other everywhere we went. We now need to decide what to do with all of Alex’s jerseys as he now has quite the collection. 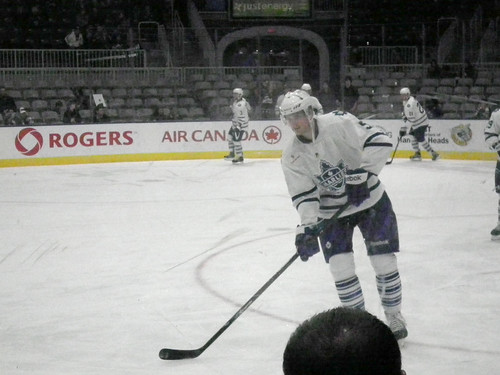 On the last day we went to Niagara on a coach tour. We stopped at Pillitteri Winery and purchased some delicious ice wine (which alas is no longer with us) and learned how to do a proper wine tasting. We went to various stops on the route, such as the whirlpool and Niagara on the Lake. We went down to the water and there was no one else around and then Alex gave me a massive shock and proposed to me with a ring he made! There was a little note curled up inside, I’ve no idea how long he had planned that but I burst into tears and told him off, you know, as you do. He found a pretty stone on the shore of Lake Ontario and hopefully a kind jeweller called Jo will be able to set a piece in the centre of the ring and also size it down a little bit for me so I don’t lose it. Before any more people ask, no there are no dates in mind, nor do I want a big party (because that’s essentially what a wedding is and I don’t like weddings) and as Alex said to his mum on the phone, “there is no agenda”.

And then we got to Niagara itself! It’s wet. 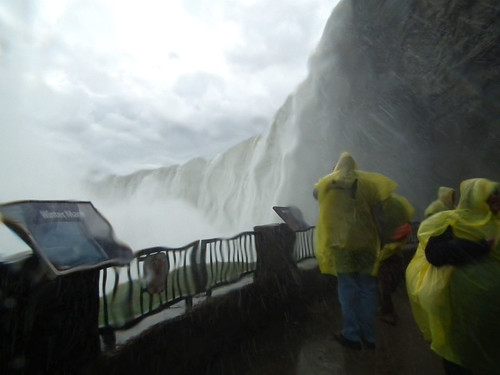 It was a great trip and there’s loads more we could do if we went again. The flights were nice too, I recommend Air Canada, nice food and the entertainment system is great. I watched several films but can definitely recommend Django Unchained if you haven’t seen it. Brilliant (if you like Tarantino of course).

Then on Tuesday I went down to the Welsh border to pick up Daisy (who at this time is probably going to be renamed Gwen as her name doesn’t suit her)! She’s a bit nervous of us (it’s a farce trying to get her to go outside for example) but I think she’s settling in. She wagged her tail for the first time today and she seems to get on well with Fletcher. He’s not taking it so well, he had a bit of a bad time whilst we were away with his illness and also he was attacked by a stunned swan one night and I think he’s a mixture of feeling ill and also hard done by. Don’t worry, he’s getting plenty of fuss, probably a lot more than Gwen is!