I’ve been quite lazy. Starting a new job and the extra hours I’ve lost in my day due to car sharing and coming home late has eaten dramatically into my evening which has made me too tired for any sewing time as I’m not getting home until almost two hours later than I used to a few weeks ago. I managed to do a little bit this morning for the first time since the weekend. Nothing spectacular, just a bit more on Wallander.

So what did I make on the weekend then? 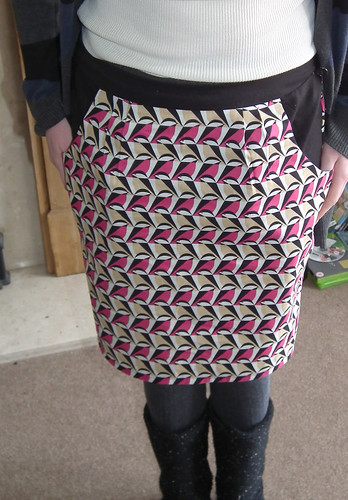 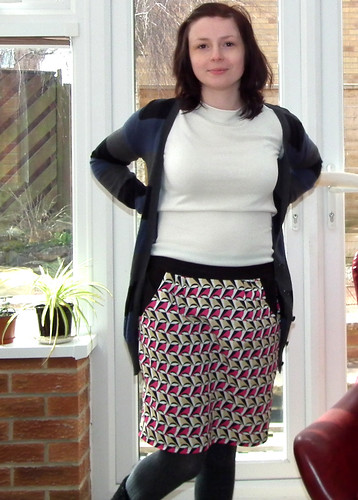 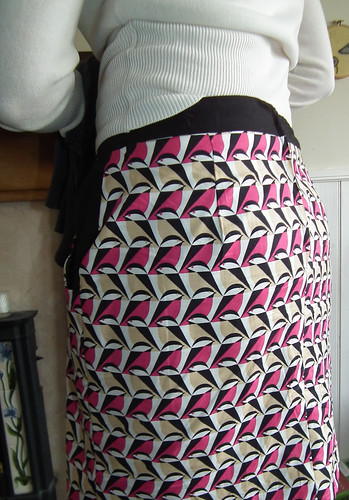 I’m very pleased with my Mixteca skirt, especially since I bodged the zip on the back- it’s not meant to have a flap over it. OH didn’t realised it was a bird print ’til I pointed it out- does anyone else just see a geometric pattern? 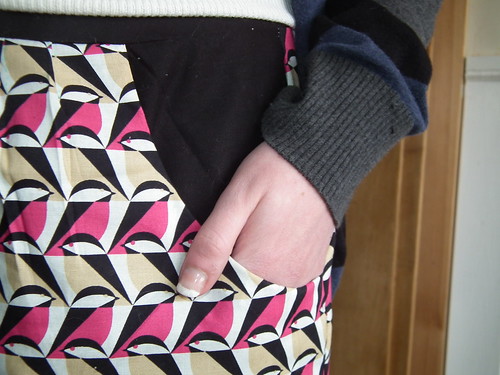 I really like the pockets and it’s not too tight on me like my previous clothing efforts have been which is nice, I might actually wear this one regularly.

Yesterday I received my swap parcel for the Covert Robin from Lisa in Australia….

I was very lucky and got lots of stuff! The biggest part is a sewing machine mat but I think I will put it on my mini quilt wall when that actually happens instead as the area around my machine tends to get destroyed with glue and whatever else (OK so pretty much just glue from turned edge appliqué) and I don’t want to get it dirty. I also got some beads, tea, a pincushion and lots of pins which is very useful as I do lose the heads on mine from time to time and have to throw them out. Thanks Lisa 🙂

So the rest of the week until Monday I want to do more on Wallander, get a quilt pattern out to a magazine, post a tutorial on my blog, do my penultimate row for the Popular Patchwork Row by Row swap and maybe another block for the Forest QAL if I feel like I need a break. I also have my Marcelle cushion to make, the next Around the Bend project waiting to be worked on, another block for the Quilt Together project I’m waiting for fabric for and a round for the UK borders Agency to do this month so I don’t want to set myself too many goals for this week as there are plenty more things to be getting on with!