HomeUncategorizedConversation Bag Tweaks
Book Review: Quilt a Gift for Christmas by Barri Sue Gaudet And the winner is...

Have you seen the fantastic free pattern for the Conversation Bag over on Sew Sweetness?  I made one! It was also in the first issue of Modern Quilting which is where I worked from and where I saw it first and decided I MUST MAKE ONE. 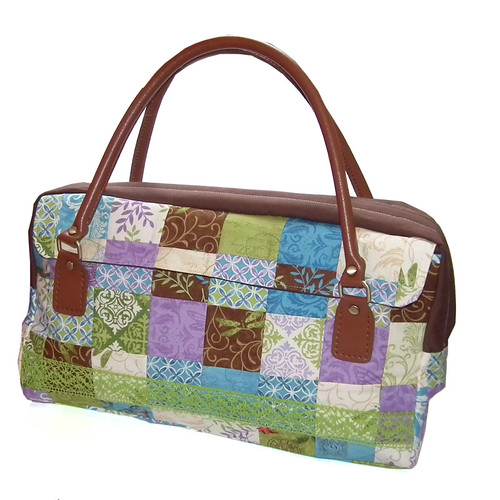 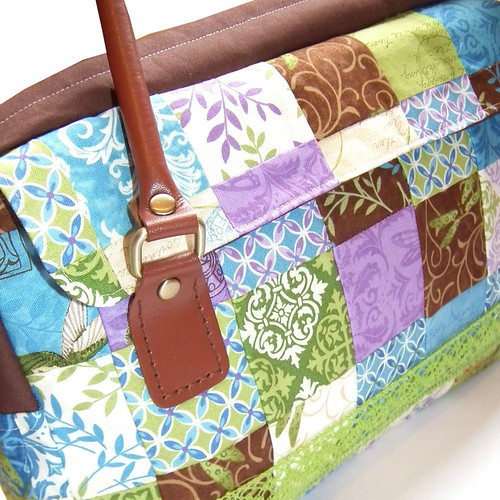 If you fancy making one too I thought I’d pass on some tips and flag up some parts of the instructions I misinterpreted to prevent others from possibly doing the same (or it could have just been me being an idiot in some cases).

1) You need 34 charm squares, not 33 for the patchwork. I was 3x 2 1/2″ squares short when I made the panels up so I had to cut more.
2) The magazine says the interior side panels (both from interior fabric and interfacing) measure 15 1/2″ x 14″. This is a misprint, it should be 5 1/2″ x 14″. It is correct on the blog.
3) Fusing fabric together- Nothing is mentioned about the fusible fleece for the flap and I left mine out. You could do the same or fuse it on top of the heavy interfacing like it is supposed to be, the same as the patchwork side pieces. The blog is correct, it’s just the magazine again on this one.
4) After the patchwork the sewing allowances are 1/2″ NOT 1/4″. I did not know this til I finished the bag and looked at the blog instructions, which are correct.
5) When you’re putting the magnetic snap in and you “fold in half lengthways”, this means folding so that the two shortest edges are together. This took me an embarrassing length of time to figure out.
6) READ AHEAD on the outer pocket assembly. The top is the rounded edge but it doesn’t say this until after the snap is put in. So obviously I put mine in the wrong way round with the rounded corners at the bottom. That’s why mine has a lace detail… (this doesn’t matter for the blog instructions as ther shape has changed to a much easier rectangle)
7) The magazine says you align the flap with the topstitched interior main panel which is confusing. The blog has a helpful picture and omits the word “topstitched” which makes more sense. You are actually aligning it with the unfinished edge otherwise you will end up sewing your pocket up!
8) When sewing the zip, hand crank over the teeth. I broke two needles.
9) When you’re sewing the zip panel to the main pieces, do pin. I decided not to and my curves are not perfect.
10) It is really hard to sew the Y seams to join the bottom if- like me- you’re not used to 3D sewing, you have been warned!

Other than that though I would say don’t let me put you off. Go by the blog instructions– they’re a lot more accurate and there’s more step by step photos to guide you. It really opens your eyes to how bags are put together and you learn lots of things along the way. And of course you get a pretty bag at the end. It’s also an excellent way to use up scraps and give you an excuse to get a Big Shot with 2 1/2″ die….

I must say I love working with these handles, they really set the bag off and give me an excuse for hand sewing. I bought these from this Etsy shop.