It’s time I told the (boring) story of the curtain fiasco that I hinted at earlier in the week. I now kind of wish I just made it into a quilt.

Firstly, you know how I was finding the piecing so boring? Well I finished enough to make one complete curtain, deciding to finish that one before embarking on the second. I added a band of white to the top and the bottom, but the measurements were based on guesswork. Holding it up to the window, it was too short by about 5″.

At this point it wasn’t a problem, I decided to add a 6″ band of yellow to the bottom. I then sewed the lining on, which is smaller than the front of the curtain so that the front curls round the back. Only when I actually had the curtain rings did we discover it was about 6 inches trailing the floor and they were too long! So I unpicked the yellow and stitched up the hem with just the white.

Only now it was several inches too short and it didn’t cover the bottom of the window! ARGH!

So what I have done is restitch the yellow back on yet again, but made the hem smaller and because it was stitched on after the lining, it makes the construction a little different. Some how this has made it the right length at last!

Bearing in mind I kept stitching the bands the wrong way round and had a lot of unpicking along the way I have really hated making this curtain. There’s loads of stitch holes from where it was unpicked that I’m trying to ignore, and also despite washing it there is still some really horrible brown stains that must have been on the fabric when I bought it. And I have another to do for the other side! At least I know what to look out for this time. I need to buy some more curtain lining.

I do kind of like it though, especially from the picture where I can’t see the problems and the faults as clearly. I love how it showcases my favourite ever fabric line.

On a happy note, my fabric arrived for the Japanese Charm Swap so I’ve cut my squares and they’re being posted today. And I will get 56 5″ squares back in all different japanese fabrics! I feel an eye spy quilt coming on.

Linking up to WIP Wednesday as there’s another curtain to go before the month is up! 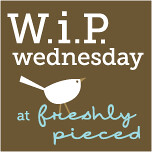