So after the mayhem of last week, Sunday allowed me some sewing time for the first time in nearly a fortnight! So the backlog has made me “need” to start two new quilting projects. More on that later in the week. And I haven’t finished patchworking my boring pattern curtains yet!

Anyway a couple of weeks ago I mentioned the free motion quilting group on Facebook started by Julia at Gone to Earth. We’re working through the Angela Walters book. There are only 7 of us but I’m in with some of the popular girls- Kerry from Very Kerry Berry and Ali from Very Berry Handmade and Angela herself may be dropping by to see how we’re getting on!

So swirls were the first in the book, so I had a quick sketch…

And decided to get stuck in straight away with the first little block. I’m going to sew a charm pack together double sided for this project as a quilting sampler. I did have a dodgy piece in my charm pack though- boooo!

And then because I’m a risk taker I decided to add it to the mini quilt I’ve nearly finished for Brit Quilt Swap 3! 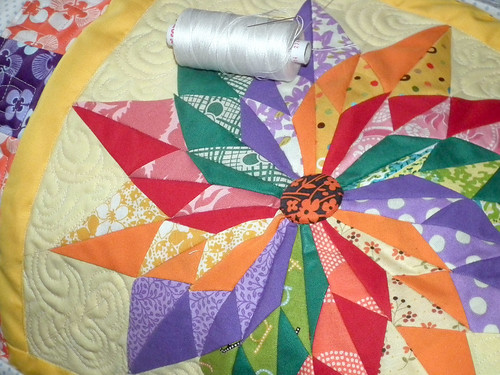 It’s hard to keep my stitches the same length but it’s not too bad I don’t think. If I was working on a bigger space than just a few inches I think it would be easier, although I don’t fancy heaving a massive quilt through my machine with this design!