After last year’s car accident, I decided it wouldn’t be wise to venture out in the snow we had this weekend, other than to take Fletcher to the park. This meant I had a lot of time in the house, and as OH had to go to bed mid afternoon both days ready for his night shifts, I had a lot of time on my own to get on with quiet stuff- meaning I had an excuse not to hoover the living room or set up my noisy chocolate tempering machine!

So happily I spent many an hour in the garage conversion. I have nearly finished ironing and folding my fabric collection, and I only really started doing it properly on Friday night… About 5 or 6 BIG pieces of fabric to do and I’m done- I even ironed my scraps! Still plenty of space on these two shelves to grow into 😉 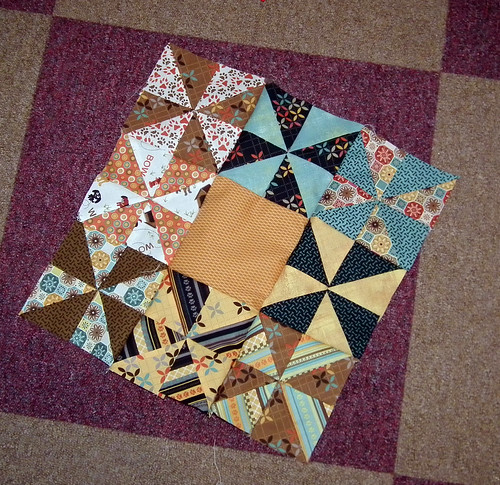 Also, do you remember that finish-a-long I’m doing? I have finished one of the 5 sides. I did a few more pinwheels as well but I got bored quickly, but I will get there. I just don’t find making tons of pinwheels that exciting… I’m writing it up as a tutorial as I go as I’m hoping to sell the project to a magazine as it’s been ages since I did that kind of thing and I want to get a lot more involved in writing this year.

Next, I love to infringe a bit of copyright as much as the next girl… I was asked by OH’s brother to make a Lady Googoo for his stepdaughter for her birthday in a couple of weeks. I drafted a pattern, found the body was too long on more than one occasion, snipped and restitched and came up with this… I’m going to make her a microphone out of felt too as I still think the body is a bit too long. If you don’t know what this is- join the club! It’s called a “Moshi Monster” apparently. The skin colour was really difficult to match as everything was too bright pink or too orange, but the fleece blanket I bought to line my hedgehog’s enclosure was perfect- and I had a spare bit big enough. Yey for upcycling!

Next, I discovered that I hate paper piecing! This is my first attempt and I just couldn’t see through the fabric to line things up properly, which resulted in a helluva lot of excess fabric to cut off and unpicking and starting again. I really didn’t enjoy it, but maybe it’s something to stick at and I might grow to like it as it becomes easier. I also need to try the freezer paper method, I just can’t get my head around how that works, this was hard enough! It is baggy in places too as I only finger pressed, I could have done with the iron downstairs and pressed along the way and I certainly will next time…. which will be after I buy a tabletop ironing board and cheapy iron to keep in my room. This tree is part of a cushion project with 3 different trees by Lynne Goldsworthy in the latest issue of Fat Quarterly.

Lastly, I did a bit more quilting on the Goldfinch quilt, then I cut and pieced the patchwork squares for my Mouthy Stitches pouch swap. I’m going to do a trial run on the construction with other fabric to see how it works (and to practise my zips!) before I put this into the pattern. I *finally* get to start my dressmaking class this week as I was working away last week and it was cancelled due to teacher illness the week before. maybe I will get some zip pointers then!