I was browsing around on the internet for a review of this sewing machine before I bought it and not much information exists, I suppose this is because AEG only started selling sewing machines in June this year and not many people have gone out to buy one yet. I also thought some people might have similar experiences and difficulties as me (though I must say this is a favourable review!) and so I would share my experiences so far of the last 12 hours of owning the machine- hopefully it will be useful to someone!

Anyway this is the machine (as mentioned in my last post), I bought it for £200 from Argos as an online exclusive…

First up I should mention my experience with this machine is in comparision to the only sewing machine I have owned prior to this which was a mechanical Lervia machine from Aldi. So not particularly a very sophisticated machine so a lot of features I may be struggling with are things that non-primitive machinists will probably laugh at me for 😉

The AEG 680’s general specifications can be found here as it’s not worth me going through absolutely everything, though I will say it has a crazy amount of embroidery stitches and a LCD display for your stitch length and width.

It comes with a zigzag foot, a buttonhole foot, a button foot, a zip foot, a gathering foot and a blind hem foot, as well as needles (including a twin needle) and some samples of Coats thread. I quite fancy some spare bobbins, a walking foot and a free motion embroidery foot for it too, however AEG customer service haven’t been massively helpful and there were no suppliers for extra parts in the manual that was supplied with it (more about that later). I e-mailed AEG and after two days got a simple response that they don’t sell the parts direct and I am to go back to the retailer for them. Since the retailer is a catalogue shop I don’t think that’s particularly helpful so I have replied saying so, I probably won’t find out what I can do til later in the week. However, they seem to be pretty universal and I am sure the screw on feet I bought for my Lervia from HERE will fit. Which is nice because I already have the free motion foot and had hardly used it.

The instruction manual isn’t fantastic and if you like to read about your new buy in detail with a cup of coffee and a biscuit, you will be sadly disappointed. It is pretty to the point though, and so far there are only two sections that I feel could have done with being elaborated on, the first of which lead me to believe my machine was faulty yesterday and I sent another e-mail to AEG to complain!

So my first issue was the feed dogs. I lowered them using the switch on the back, however when I switched it back to up, nothing happened. I tried levering it up with a screwdriver from the bobbin compartment  but it dropped again and this was quite scary since I’d only taken delivery of it at 5.30 yesterday afternoon. What the instructions failed to tell me was that if you switch it to up and then start sewing, it electronically raises, so in fact there was nothing wrong with it. This is weird for me becuase on my old machine they thunked up and thunked down mechanically with a switch so I’m not sure if that’s me being behind in the technology or not!

My second issue is ongoing and is surely operator error. I have not got the hang of the lever and the one step buttonholes- I just got a ripped hole with some dodgy stitching in front of it. My background is in four step button holes so this might be me, but the instructions aren’t clear on what you’re actually supposed to do with the lever and how much user input is needed for creating a buttonhole, so I will have to persevere with this one and try and figure it out for myself.

It took me a little while to figure out the auto threading from the manual’s instructions and for a while I thought it would be easier just to thread the needle the old fashioned way. However with a bit of practise (and now I can do it with one hand rather than two) this should be a useful tool.

Another thing that doesn’t seem to work for me is the reverse stitch button which is supposed to secure the end of your sewing on settings 1 and 2. That keeps doing another stitch forward for me. Maybe I need to try holding it rather than just pushing it. I also haven’t used the start/stop button- it doesn’t work if the pedal is plugged into the machine, which I have been using cos I’m used to it.

One of the main draws for me was the fact that it was computerised (and the one step buttonhole that currently isn’t working!), but also the vast array of embroidery stitches. Especially this toadstool one, isn’t it cute?! 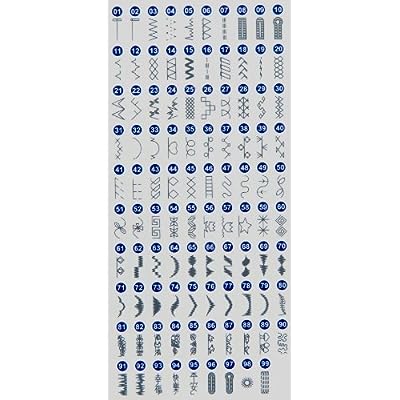 When stitched it splits one of the two doggies in half, poor thing! I could manually sew that missing stitch on each dog so it’s not a big deal, it’s just a bit sad really!

So anyway, after a bit of experimenting, some upset at a not-really-broken sewing machine and then going back to it again, I did manage to finish one of my many WIPs- the bag from last post. It’s not fantastic as I put the fastener too low, the straps are a bit weird where they meet the bag because of how I sewed the lining in (i.e. wrongly) and the corners confounded me. However I think it’s quite sweet so I’m going to make another one at some point- learning from my mistakes! Just a shame that cutting pattern pieces from large pieces of fabric is such a tedious and complicated arrangement!