Button swap – and other stuff

It’s been confirmed that Amiee has received my package so I can now blog what I sent in the Crafteroo button swap!

I made my very first book. It was fine up until the point where the cover wouldn’t take the impression of the buttons underneath particularly well so I added a load more glue. And then the glue got all the other pages a bit damp and I had to iron them with kitchen roll between each leaf. Twice. Anyway I’m pretty happy with my first attempt at bookbinding 🙂

I also sent her some (pretty badly) covered buttons, some wooden buttons I love that I stitched onto scrapbooking paper and stamped with whatever stamps were in my desk at the time, and also a box of trufflepiglet chocs- most of which were champagne truffles with little buttons on top! I originally made red buttons with popping candy inside, but the damn things did not like being demoulded! 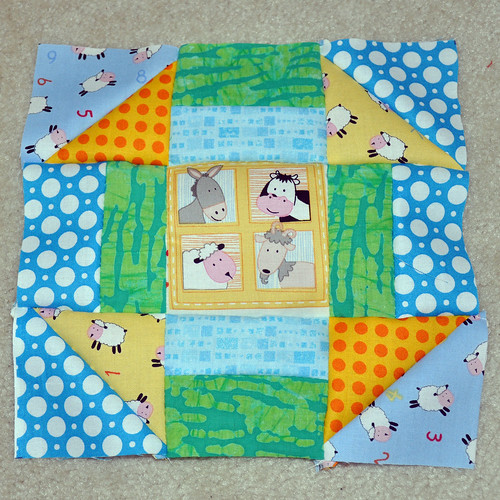 In other news, I have started on a farmyard quilt for OH’s baby half-brother’s first birthday next month. Here’s the first block of eight. This means I have two patchwork projects on the go at once which can only end badly :S

Also I had a fight with a bowed Billy bookcase and put the back on sideways, sawed off the excess (taking the end of my thumb off in the process) and getting OH to drive in some screws to stop the damn thing collapsing again. Oh and before then I glued on some Ikea goat-based fabric I liked but was too big for my usual uses with bookbinding glue. That worked a treat! Anyway this bookcase can actually hold the weight of books now. Who’d have thought it?! Try and collapse your way out of that, Billy boy!

Also my last day working on the magazine is tomorrow! I decided to go back to a 9-5 job so that when I’m at home the time is MINE, and also so I can do crafty things again without feeling like I don’t really want to. It’s really nice making your hobby into a job, but when you have to deliver projects all the time and so many of them, you really lose the drive to do anything for yourself! This was the problem with PennyDog, which is why I’m streamlining (again!) and changing the way it works later this year. So I am crocheting and quilting and bookbinding, all the stuff I wanted to do but never had the time to. It’s nice 🙂